Daydream Mode - An Old Solution to an Old Problem 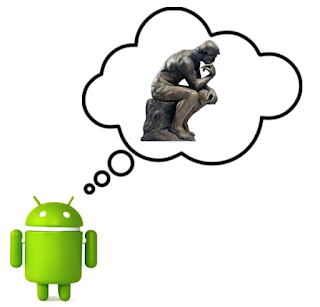 Daydream Mode not working for you?

After having problems with Android 4.2's new Daydream mode, I discovered the problem which was preventing the mode from ever starting. If that's why you're here, skip to the very bottom section entitled "Developers Beware - You Need More Sleep".

What is it all about anyway?

Got an Android 4.2 device? Have you tried the Daydream mode yet? It's basically a screensaver for your phone. It can display items like a clock, top stories from Currents or Flipboard, show a slideshow of your photo albums or even StumbleUpon for you; the last two seem to be wrought with potential dangers in my opinion, but hey, it's an option.

Is it a novelty? Partly. But there is a genuinely good reason for its existence; screen burn. You might have heard of this phenomenon in the world of TVs and monitors. Also known as ghosting. If an image is held on the screen for too long, without it moving or any other activity happening, that image can actually have lasting damage on the screen. The most common symptom of screen burn is the retention of some pixels or parts of an image long after that image should have disappeared, resulting in a ghostly silhouette of the pixels that were once there. Basically what happens to your pixels when they die and can't enter the afterlife. Seen the movie Ghost? It's great isn't it? Ghost is actually an extended metaphor and a warning about screen burn.[1]

Old CRT monitors, like the one pictured below, were bad for screen burn, and was one of the reasons early operating systems supported screen savers.


Whilst more modern LCD monitors were less susceptible to screen burn, plasma TVs and monitors also suffered. But what's all this to do with Android Daydream mode?

Unfortunately, modern screen technologies used on your smartphone might be susceptible to screen burn also. OLED screens, and AMOLED, can also be damaged with an image shown on screen for too long. This means your mobile screen might end up retaining the image made up by some pixels which are static and shown for long periods of time. Menu bars, soft key buttons and the likes, these are the kind of areas on the screen which change infrequently, and therefore may end up burning into the screen their spooky, ghostly presence long after you want them to.

Hence the introduction of Android's version of a screen saver; Daydream mode. 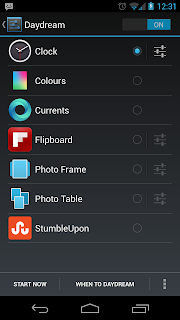 Daydream mode offers its services only when your phone is charging or in a dock. These options are accessed in the "WHEN TO DAYDREAM" section. 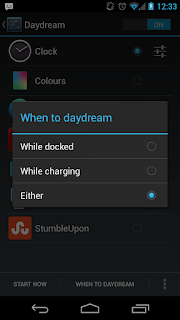 The Clock option is especially suited for those looking for a night time bed-side clock. It even has a "Night Mode" option allowing for the screen to be dimmed to avoid it beaming out too much light in the night. 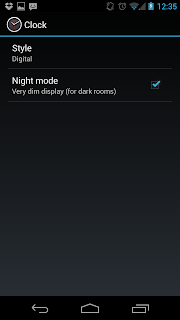 What happens if you are in the position of having selected your Daydream options, plugged your phone in and docked it, but nothing ever happens? I discovered that a Developer setting might override your phone's ability to daydream.

In Android 4.2 (and presumably above), the developer options have been hidden from view by default. To enable that menu, enter the "Settings" section of your phone, and select "About phone" from the bottom. Tap on "Build number" seven times. No no, I'm not kidding. Tap seven times and you will be treated with a toast message informing you that "You are now a developer" which is nice. The developer menu will now be available under the standard "Settings" section of your phone.

Check your "Developer Options". "Stay awake" must be unchecked for Daydream to work. 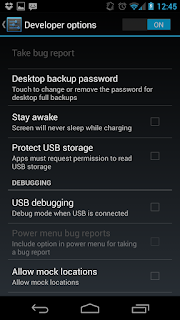