This review focuses on the Samsung software that is bundled on top of stock Android on the Samsung Galaxy Note 3, a 4G phone with 3GB RAM and a whopping 5.7" full HD screen.

As part of a competition run by Gizmodo UK, I have won 3 new smartphones. In exchange for keeping the phones I have agreed to write some unbiased reviews.

A version of this review can be read in an article on Gizmodo UK. This blog post is the full, unedited version.

"You might not realise from the rest of the review but I really love this phone." 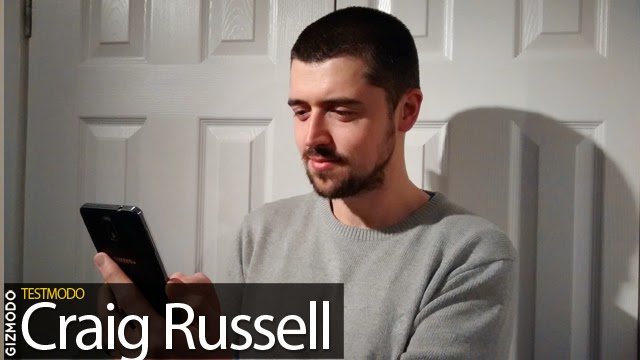 If you are a manufacturer that relies on Android, you are building upon a rock solid, fast, modern mobile OS that has a great rate of improvement. That should at first glance make it easy to produce excellent phones as the software is all but taken care of for you. However, those pesky customers that might buy your phone today may well buy a competitor's phone tomorrow, especially if the only difference is the size or colour. Manufacturers tweak the software so that its phones are unique and add value. If you love something so much and only Samsung build it then you’re going to stick with Samsung.  That’s the theory anyway.

The reality is that this leads manufacturers to bastardise Android so much so that it no longer resembles Android. When it comes to software, instead of focusing on a few really useful features and ensuring they work well, Samsung instead opt for quantity over quality. In terms of providing useful features, compare a sniper rifle with a sawn-off shotgun; given enough bullets both will hit the target. The difference is in how much of a mess you leave around the target. This is the collateral damage of a differentiated OS.

"Despite its flaws, it’s still the best phone I've had the honour of using and calling my own"


There are so many features that are great ideas on paper that I’ll never use in practice. That’s not to say it is all bad though; there are some truly useful and interesting features here that you simply cannot find on any other phone. The following was produced on the Note using the stylus and it was incredibly easy to scribble out. 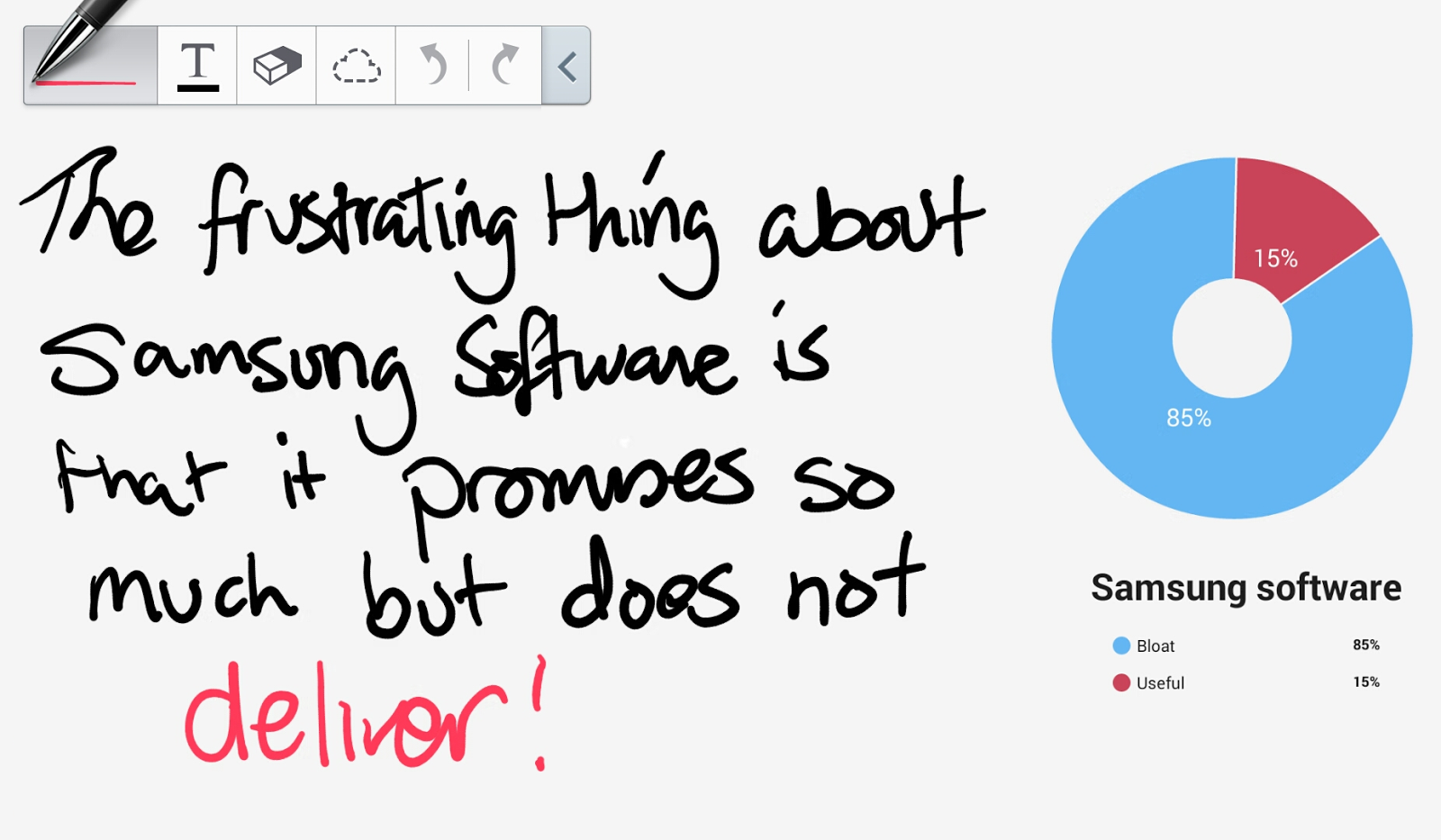 I typically don’t use a stylus; I tried but it is just so unnatural when compared to a pen and paper. I’m just back from a developer conference and figured the note taking features of the Note 3 might beat the natural pen and paper approach. I was wrong. I very quickly gave up and reached for my paper notepad. The real notepad is bigger, writing on it is more natural and, of course, the battery life is much better! The provided S-Note app is the best note taking app I’ve used on Android which supports freehand input. The quick graph insertion is also pretty good! However, the physical notepad still won where speed of entry is key.

The stylus itself is pleasant enough to hold and the fact it has a button on it for added functionality is a good idea. The fact that 99% of the times I clicked that button was an accident shows a poor design. The fact that the stylus lives in the device sounds like it’ll always be within quick and easy reach. The fact that to remove the stylus from its slot requires intricate use of sharp nails, usually after having rotated the phone, is not so good. Unless you have the precision of a surgeon getting hold of that stylus is not an easy task and by the time you get it out you’ll have forgotten what you wanted to note down.

Action Memo is actually quite useful. It pops up a small post-it note window, floating above whatever you were doing. You can quickly scribble a note and it has a preset number of actions to perform on that scribble. The most useful I’ve used is the “type someone’s phone number and name and save as contact” action 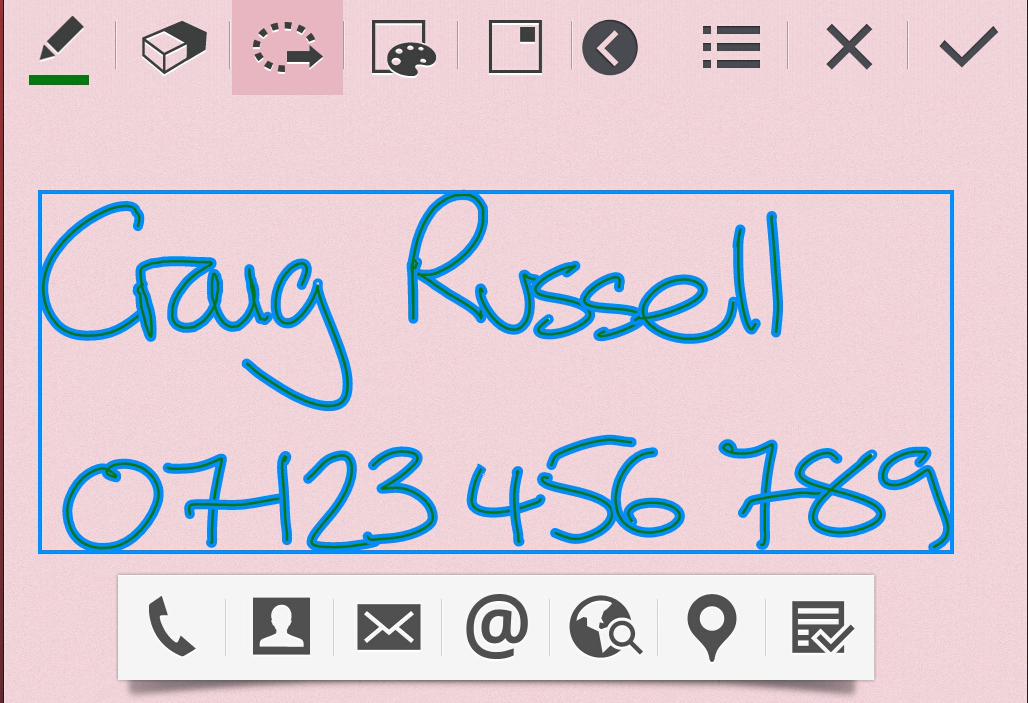 Note the pink floating icon below the “Cancel” button - this returns you to the note at any time and floats over any other window until you dismiss it. This is brilliant and really well thought through.

The Pen Window feature is intriguing; draw a box somewhere over any window and you can choose an app to run within that box. Repeat for multiple boxes.

Again, another feature which looks amazingly useful, until you realise there are only a few apps which can be run in this mode. If all apps supported running in this way, this could be the biggest reason to buy a Samsung. As it stands though, it is yet another “great idea I’ll never use”.

How about Multi Window mode, whereby two apps can divide up the screen between them and run side-by-side? Well, whilst some apps will run alongside some other apps, achieving features like dragging and dropping images from the Gallery app into the Gmail app show “Not supported” with no further help. By the time you have worked out which features are supported between which apps, you’d have been quicker flicking between the windows.

Screen Write lets you take a screenshot and scribble all over it. This is a convenient way of annotating the important parts of the screen before sending it on. Note the use of Screen Write to highlight the shockingly fast 4G download speed here: 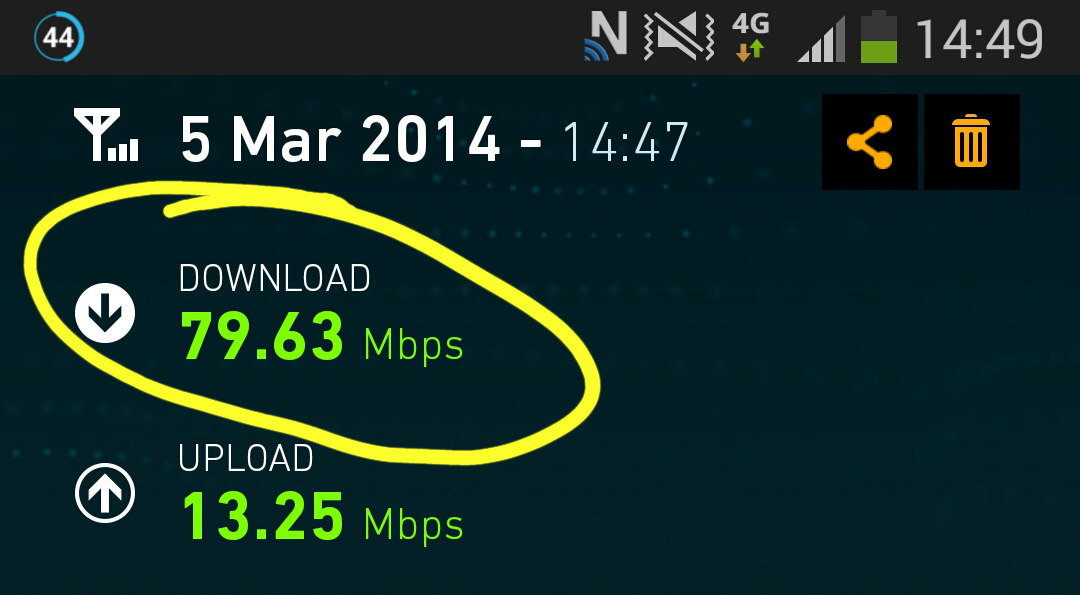 I have disabled all of the S Motion features. These include features like swiping your hand across the screen to trigger a screenshot (doesn’t work reliably), face detection features to control keeping the screen on and scrolling etc… (doesn’t detect my face and consumes battery trying) and other such gimmicks. These are clearly aimed at fulfilling a checklist of new and exciting features to look good on paper; none of them are worth keeping enabled in reality.

The TouchWiz launcher itself should be quickly replaced with something more customisable. TouchWiz launcher has some disappointing shortcuts that cannot be changed. Swipe up to open My Magazine (a Flipboard bastardisation). This results in many accidental openings of an app I don’t want to use. Replace the launcher with Apex or Nova or anything else to help maintain your sanity.

There are some added features that are brilliant however; the kind of features that make you angry at stock Android for not having. Built in DLNA sharing button in the Gallery app for instance, letting you fling pictures and videos at smart TVs and other DLNA clients in your networks is wonderful.

The camera app has many excellent features. The ability to record slow motion video is great fun. As it is hardware enabled slow motion (not just simulated in software) the videos are smooth whilst being slow. Similarly, fast motion videos and smooth motion videos take advantage of the hardware to produce nice looking videos. And the phone can shoot 4k videos! The camera quality is good and the extra Samsung modes are nice; features like detecting movement between subsequent photos to remove tourists walking by and ruining your nice shot. Beauty face is great for effectively applying layers of makeup to your subject; used with moderation and it produces a nice image with less wrinkles and blemishes. Used without moderation and it results in hilarious faces with full slap on. Either way, it is a nice-to-have option. 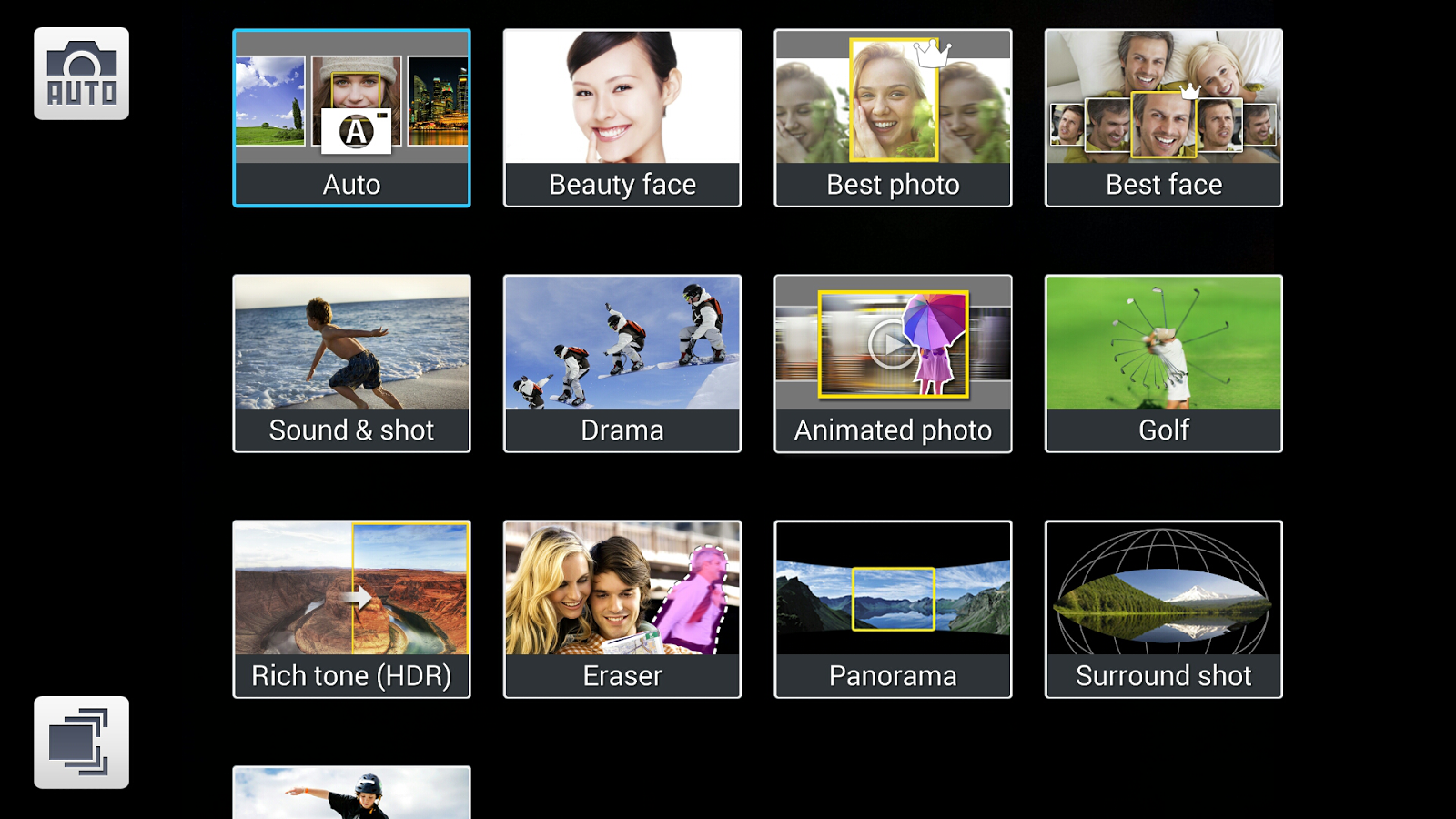 By disabling features and avoiding apps not used, you shouldn’t be affected with the Samsung extra value features right? Well, Samsung decided that there are a whole bundle of apps that you cannot remove from your phone. These are apps that you can disable but never remove. Storage on a mobile device is a precious commodity (even with a 32GB device) and not something to be taken for granted and certainly not something to be abused.

As a developer, I often strive to cut sizes down, even by a number of KB, so to see uninstallable apps hogging up the storage is infuriating. I wish I had time to do a more in depth analysis, but at a rough count, the uninstallable apps take up 0.5GB and counting. I’m too depressed to count up any more but know there are more still! The image below shows just some of the apps which cannot be removed. 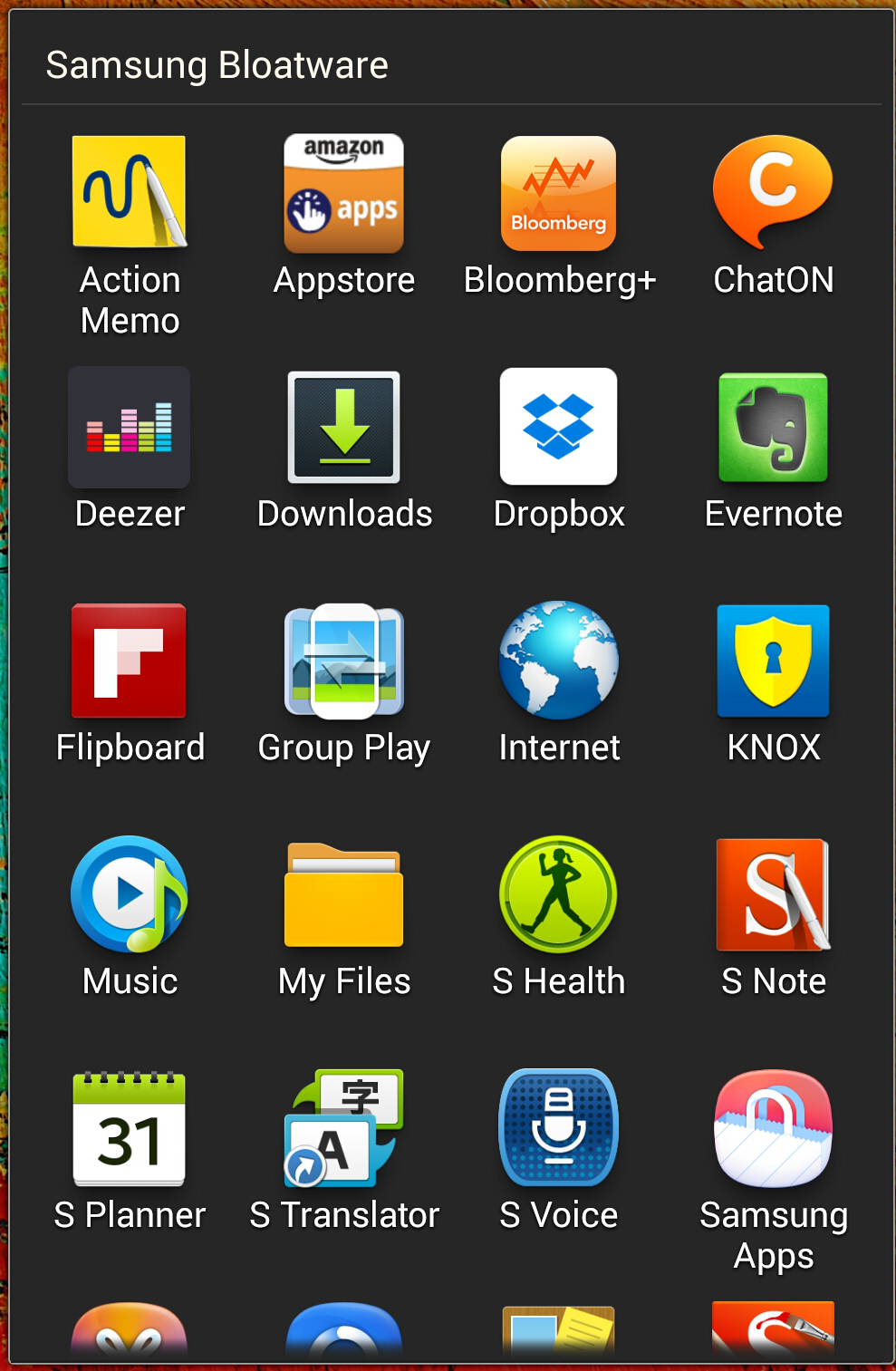 Is it all doom and gloom then? No, not at all. The truth is that prior to Testmodo, I would never have considered buying a Samsung that didn’t come with stock Android. I am left in uneasy territory therefore; I like some features enough such that I couldn’t be without them now yet am annoyed with how little control I have to clean up apps which should never have been on the phone in the first place.

As such, I’m keenly awaiting the end of this review so I can root the phone and clean it up as I see fit. I know it’s a novel thought, but as the owner of the phone I would like some say over which apps are allowed to be on it. Samsung have done enough, however, to stop me going all the way to reverting the phone to stock Android. I’d lose the slow motion camera, the 4k video recording and the DLNA-enabled gallery apps.

"Samsung has converted a stock Android zealot into a Samsung user"


You might not realise from the rest of the review but I really love this phone. This is a phone with many annoyances. Yet, despite its flaws, it’s still the best phone I’ve had the honour of using and calling my own. The fact that the majority of extras are useless to me does not change the fact that a select few are invaluable to me. Whilst I may wish Samsung would better focus its efforts on producing a select few high quality add ons and give up the gimmicks, they’ve done something unexpected: Samsung has converted “a stock Android zealot” into a Samsung user.
Posted by Unknown at 11:37