This review focuses on the battery life of the Samsung Galaxy Note 3, a 4G phone with 3GB RAM and a whopping 5.7" full HD screen.

As part of a competition run by Gizmodo UK, I have won 3 new smartphones. In exchange for keeping the phones I have agreed to write some unbiased reviews.

A version of this review can be read in an article on Gizmodo UK. This blog post is the full, unedited version.

I’ve lived long enough to know that there are precisely two things in life which concern me. The first, and rightly most worrying one: spiders. The second is the constant and unshakable fear of my mobile running out of battery.

Despite my best efforts it is difficult to plan for spiders; they have that nasty habit of dropping from ceilings without warning. When was the last time you heard a spider shout “Geronimo”? I rest my case.


I’ve found that there are a number of strategies I’ve adopted over the years to mitigate a low battery. I constantly seek out a source of charge, even if my phone has plenty of charge left. I carry around a portable battery charger at all times. The latter seemed like a good solution at first until I realised it was another battery I worried about charging, another mouth to feed.

These aren’t solutions though; these are workarounds. The solution is to have a mobile battery capable of getting me safely through the day. With a battery capacity of 3,200 mAh, the Samsung Galaxy Note 3 has the largest battery of any mobile I know. The number may seem excessive compared to other devices (like my Nexus 4’s 2100mAh) and outright absurd compared to others (like the iPhone 5s’s 1560mAh).


I wanted to put this massive battery to the test and I did so in two main ways: torturously heavy use and an “everyday” usage test.

For the heavy use testing I relied on streaming movies through Netflix. Of course, selecting a movie to watch is no small decision: I wanted a movie that was universally revered and ideally something I’d never gotten around to watching. I came up with Ferris Bueller’s Day Off, the 1986 classic I’d somehow neglected in my youth. For the illusion of science, I decided to watch the same film under different conditions and compare the battery life. Netflix has a recommendation system based on what you’ve been watching previously. As such, I am now hugely concerned that Netflix has a dedicated team working on offering up recommendations to people who only watch Ferris Bueller.

Setting the screen brightness to 100% for everyday use is unnecessary; the screen is bright and beautiful at 60%. However, for the purposes of testing, I turned it up, reached for my sunglasses and settled in to be delighted by a movie that had almost escaped me. I decided to use headphones with the volume set to full volume The choice to use headphones that was in no way influenced because I was doing some of the testing whilst at work. I certainly wouldn’t have had movies playing on my phone whilst I was at work. Cue nonchalant whistling and shifty eyes.


Ferris Bueller’s Day Off has a runtime of 103 minutes. I streamed the film 3 times: once using wifi, once using 4G and once using 3G.

I figured that 4G would consume more battery than 3G for some reason but my testing revealed this to be very wrong. I might suggest that for data-hungry uses, like streaming video, 4G is actually easier on the battery because when the 4G radio is working, it pulls down more data than 3G and therefore has to do less work. If the radio is working less, it is consuming less battery. That’s a whole lot of maths and science there backed up by around 0 actual knowledge of the subject.

The ability to watch around 3 full movies on a single charge is fairly impressive. As I mentioned above, 100% brightness is very bright. Given that the screen is typically the biggest consumer of the battery, lowering the brightness to 50-60% would go a long way to making the battery last longer still.

What about if you’re one of those odd people that does other things with your mobile besides binge-watching Ferris Bueller’s Day Off? For testing the “everyday” use I set up the Note 3 to match the settings on my Nexus 4. For me, everyday use means having bluetooth always on, auto screen brightness enabled and constantly connected to the internet. For at least 3 hours of the day I have bluetooth headphones paired and spend a lot of this time streaming from Google Music.


Being a nerd, I have more stats on my daily use than you’d care to read (I fricking love stats) so let me instead show a graph of battery usage throughout the day: 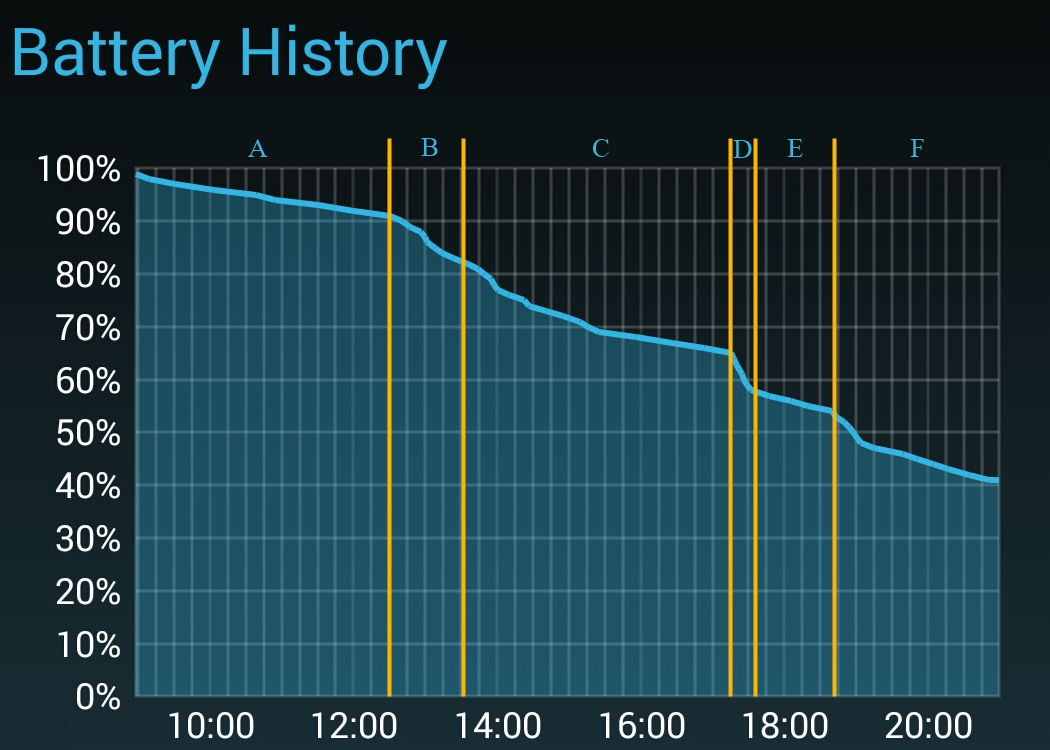 F = Texting / Browsing internet / Screen on a lot of the time

At 20.39, 12 hours after leaving the charger, the mobile still has a 42% battery remaining. This is excellent for me as I’m only ever looking to make it through to night time on a single charge. If I were planning a late night, I’m confident that this device could still call me a taxi well into the wee hours. Thankfully I’m way too old and boring to ever need that ability, but it makes me feel younger just knowing that I could if I wanted to.


For a quick and dirty, unscientific comparison, 12 hours of “everyday” use using 3G instead of 4G resulted in me having 43% battery left. I tried to do roughly the same amount of each activity. I’m happy to conclude that 4G usage does not noticeably negatively influence battery life and, as can be seen in the video streaming test, can actually use less battery than its 3G counterpart.

After each day of regular mobile usage, I’m finding the device still has 20-30% battery left after midnight. That’s impressive enough for any device, let alone one with a 5.7” full HD screen.Samsung has made a great choice in including the 3,200mAh battery; the already-huge form factor of the device makes including a larger battery easier. Samsung could have opted for a smaller battery to reduce some weight from the device but in my opinion they have nailed it.


The Samsung Galaxy Note 3 is a mobile which you can use heavily throughout the day without having to worry about when you’ll next find a charger. The obvious curse of a big battery is that you now have more time to worry about spiders.